WHY SOME BIRTH-MOTHERS SHOULD NOT KEEP THEIR BABIES 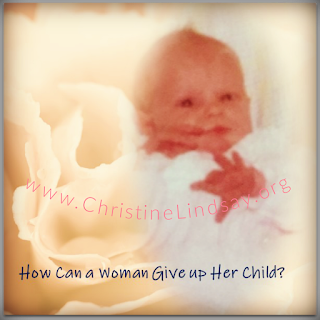 As a birth-mother that's a hard thing for me to say, because I believe major reforms to adoption are badly needed today. Too many women are placing their babies in domestic adoption because their immediate circumstances force them to. Poor financial means, no support can make or break a family. But not all birth-mothers should keep their babies. Not every woman who gets pregnant will be a good mother, and therefore adoption is the best choice for that child.


Time and time again, we read horrific stories of biological mothers who abandon their children, leave them in cars and then disappear from their kids’ lives to pursue their drug or alcohol addiction. Or birth-mothers who escape from an abusive situation, but to our shock leave their vulnerable kids with that sadistic man. Horrendous stories like these go on and on. In situations like these I applaud those foster parents and adoptive parents who open their hearts and homes to parent these precious children. 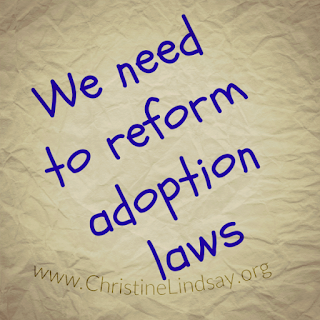 Not all birth-moms are like this, thank God. So many of us are (or will become) pillars of the community just like many adoptive parents. I’m so glad the adoptive parents of my daughter Sarah told her while she was growing up what kind of woman I was, a good woman who made a tremendous sacrifice, and that I loved her with all my heart.


But the other side of the coin needs to be addressed. Not all birth-mothers or birth-fathers should keep their babies. The following is an excerpt from Finding Sarah Finding Me that gives us a glimpse into that harsh fact.


Trying to Imagine My Daughter’s Reunion
with Her Birth Parents
by adoptive father David Sanford,
author of Thriving as an Adoptive Family

I wept hard the day my wife, Renée, and I formally asked if we could adopt our youngest daughter, Anna. We wept in response to reading a two-inch high stack of police reports, medical records, evaluations, reports, and other official documents describing the hell Anna endured during the first three years of her life.

That spring Renée and I received the great news that we were approved to adopt Anna. When we went to her foster home, she literally jumped into our arms and said, “It’s my family!” A week later she moved to our home. That evening she and our youngest son, Benjamin, spontaneously started dancing to the music playing in the background. An hour later they were still dancing. Our hearts were overflowing with gratitude and love.

I could write a book telling story after story about why I love, cherish and adore Anna. Then again, as we knew would be the case, the nightmares of her past came back to haunt her and us during her early adolescence. Three stories stand out as particularly poignant and apropos.

Shortly after this past Thanksgiving, a few weeks before her fifteenth birthday, Anna told me she had a secret. She then proceeded to tell me about a lullaby she has sung to herself every night since we adopted her. I asked her to write down the simple lyrics, which appear below. Anna was clear, “These lyrics are how I sing it, not necessarily what my birth-dad and mom sang to me.” It turns out the lyrics may be echoes of Randy Newman’s song “Sandman’s Coming” sung by Linda Ronstadt (and others). In any case, I designed a poster for Anna with a dark blue sky, moon and stars in the background and the lyrics of Anna’s lullaby in bold black letters.

Mommy and Daddy love you,

Some days later I took Anna on a date to a nice restaurant. Anna was all smiles. I explained to her that two of our goals that evening were to have fun and make sure we got to know our server by name and make it a fun evening for him too. To say the least, Anna loved the idea and we had a delightful time talking, teasing our server, and talking some more.

At one point Anna brought up her nightmares about her birth-father. I looked down. In a low voice I wondered aloud if he was still alive. Unbeknownst to me, Anna misunderstood my demeanor and statement. The next morning when she talked it over with Renée, Anna said I wished her birth-father were dead. Renée immediately corrected her, saying I would never say something like that, to Anna’s great relief.

That previous evening Anna also brought up her birth-mother. I surprised her by saying that a couple of years earlier Renée had found a photo of her birth-mom on Facebook. As promised, I looked through our archives and found the photo Renée had downloaded and printed. Sadly, the photo “backfired” almost immediately. Anna’s acting out behaviors became much worse, including shallow but extensive cuttings up and down her wrist. As well, Anna’s nightmares about her birth-father got worse.

In English shortly after New Year’s, Anna and her classmates were asked to write a poem in class. After a few minutes Anna stopped writing and sat at her desk in a reflective mood. Her teacher walked over and asked if Anna was still trying to get an idea for her poem. Anna handed a page to her.

After reading the page, Anna’s teacher asked who wrote it.

“But it’s been only a few minutes.”

“I know. The poem came to me very quickly.”

Anna wasn’t sure what to say next. “Our poems aren’t due for a few days, so I may work on mine a bit more.”

That evening Anna and I read through her poem several times. An idea came to her and she quickly typed three more lines about “my shredded paper heart.” With her permission, I’ve reprinted the finished poem below.

Me Daughter. You Father.

That’s who you are.

I know you, but

you do not know me.

they’re all one to me,

one person. But who?

The sweat is from nightmares that haunt me still today,

but these nightmares are memories,

memories of you Father.

Blood is what came from the gash in my head,

the one you gave me Father, remember?

Blood from the cut on my heart,

my shredded paper heart, for

I have been torn apart by your words.

Anger is the gnashing of teeth,

the hate that triples every time your hand hit my side.

Fear is still tied to my past,

the fear of not letting go.

The fear that you’re still here.

I know who I am, but

I don't know you.

As you undoubtedly have guessed, trying to imagine Anna’s reunion with her birth-father is almost impossible apart from a miracle of God.

Then again, could arrangements be made for Anna to meet her birth-mom sometime in the next few years? Yes, though Renée and I know it could “backfire” and send Anna spiraling seemingly out of control for weeks, maybe months.

After all, what could that woman possibly say to Anna’s desperate questions: “How could you abandon me as a baby? How could you leave me with that man? Do you have any idea how badly I was abused emotionally, physically and sexually the next couple of years? Why did you flee without me?”

What does the future hold for Anna? Much sorrow and much good. This evening I told Anna how I deeply wished I could erase all the horror of her first years of life. She looked at me and replied, “But Dad, if you could do that, how would I ever be able to help others?”

Who knows? God still makes trophies of grace. Anna certainly is one. We pray that God uses her to win her birth-mother’s heart. We also pray for the conversion of her birth-father and his reconciliation with the precious young woman that Anna is becoming.

This excerpt from the braided memoir Finding Sarah Finding Me was written by David Sanford, author of Thriving as an Adoptive Family. I placed David's piece about his adopted daughter Anna as the first vignette in my book because adoption can save the life of a child. And this is what it's all about. Putting the children first. Not me as a birth-mom, and not a prospective adoptive mom because she wants a baby.

Let's keep our focus in adoption, that we must always put the needs of the children first.

Thriving as an Adoptive Family: I was my honor to be one of the contributing writers to this book by David and Renee Sanford. 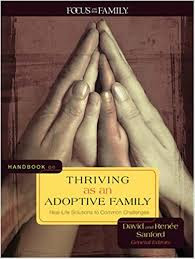 Adoption is a high calling from God, and the Christian home primary soil for planting seeds of faith.

But how will post-adoption challenges affect this growth? Most agencies do a great job of connecting families with children who need a forever family. Not many prepare you for the unexpected issues―an adopted child fighting with his new siblings or not wanting to be touched or showing signs of reactive attachment disorder (RAD). The more you know, the more confident you will be to meet the unique needs of your adopted child and your entire family.

This distinctly Christian book will equip readers to be successful adoptive parents. Packed from cover to cover with information, advice, ideas, and resources, Handbook on Thriving as an Adoptive Family will inspire and inform parents committed to making adoption work. Handbook on Thriving as an Adoptive Family is the one parenting resource that provides comprehensive, topical, Bible-based solutions for the inevitable challenges after adoption. 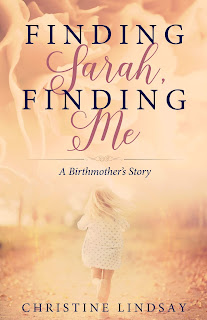 WINNER of Canada's The Word Guild Award, and finalist for the SELAH award.


A Braided memoir that shares stories from all sides of the Adoption Triad: For Adoptive parents, those hoping to adopt, Adoptees, birth-parents, foster parents, etc.

Sometimes it is only through giving up our hearts that we learn to trust the Lord.

Adoption. It’s something that touches one in three people today, a word that will conjure different emotions in those people touched by it. A word that might represent the greatest hope…the greatest question…the greatest sacrifice.

But most of all, it’s a word that represents God’s immense love for his people.

Join birth mother Christine Lindsay as she shares the heartaches, hopes, and epiphanies of her journey to reunion with the daughter she gave up...and to understanding her true identity in Christ along the way.

Through her story and glimpses into the lives of other families in the adoption triad, readers will see the beauty of our broken families, broken hearts, and broken dreams when we entrust them to our loving God.

Click HERE to read Chapter 1 of Finding Sarah Finding Me

100% of author royalties will be donated to GAiN, Global Aid Network Women's and Children's Initiative.